Over the last 20 years, glacial loss in Alaska has accounted for a quarter of the world's total — making Alaska the region with the biggest loss in glacier mass.

Researchers at the Kenai Fjords National Park have long known that many of the glaciers in the park are retreating. But now, they have data that quantifies that change over time, thanks to a new study published last week.

Lead author Taryn Black with the University of Washington and Deborah Kurtz with Kenai Fjords National Park used decades of satellite imagery to chart how 19 glaciers in the park changed over nearly 40 years.

They found that while most had retreated in that time, several of the glaciers remained stable and two had actually advanced. Kurtz said the data is a good foundation for future research on glaciers at the Kenai Fjords and elsewhere.

“So we can use this data set as a baseline to address other questions related to ecosystem change, impacts of glaciers and climate change itself," Kurtz said.

She said she was surprised to find one glacier saw a net gain in mass.

“I think maybe one of the most interesting results that I wasn’t expecting is that Holgate Glacier has advanced over the last several years," Black said.

She said that’s likely due to the accumulation of sediment into what’s called a shoal at the glacier’s end, which the team observed in 2020.

“That’s something that glaciers often do when they’re advancing, is they’re depositing a lot of sediment at the front of the glacier, and so they build out this shoal," Black said. "And that can help protect the glacier from the influence of water.”

The other advancing glacier in the study, the Paguna Glacier, was likely insulated from the impacts of climate by debris from the 1964 Good Friday earthquake, according to the study.

Kurtz said changes to the park’s glaciers are often noticeable to visitors — sometimes even within one season.

Those changes can impact how visitors interact with the glaciers there. Kurtz said the park is currently working on revisiting its management plan to account for changes to the popular Exit Glacier at the front of the park.

“For people who return to the park repeatedly, or Alaska residents and locals who are out there regularly, it’s pretty powerful to see a large feature on the landscape change as quickly as these features are," Kurtz said. "And that was what was exciting about this study — is there’s many of us who’ve been able to witness these changes for a decade or more. And the study was able to quantify those changes.”

Researchers say it’s only going to become more important to understand those changes as climate change continues to accelerate. 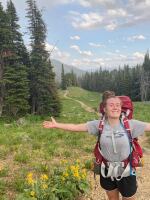